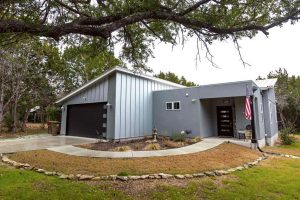 This article was written by Richard A. Marini and appeared in the San Antonio Express News on January 28, 2022.

Several years ago, home builder Shane Harrell wanted to build a three-bedroom, 2 ½-bath spec house in this small town just north of Canyon Lake. But he wanted to build something that looked nothing like the white limestone homes typical of the Texas Hill Country, something that stood out, yet also didn’t look out of place.

He decided to put a contemporary, industrial spin on the modern farmhouse, building a one-story house with single-slope roofs and cement siding, stucco and metal painted a muted gray that blends into the wooded surroundings.

The house has an open plan, with the kitchen and living area combined into one large room with a sloped ceiling and large windows. – William Luther

“It pops compared to the rest of the neighborhoods,” Harrell said. “But then it blends into the bark of the mountain cedars.”

While trying to stand out is admirable, it can be a drawback when you’re trying to sell a house on spec.

“I knew going in that this was not a house that was going to appeal to every consumer,” he said. “I needed a buyer looking for something a little different, maybe a step up from the norm.” 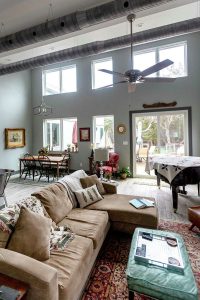 He found just such a pair of buyers in Jim and Melanie Hartwell, who purchased the house for $329,000 shortly after it was finished in late 2019. In fact, they stalked the house for several months while it was under construction.

“Lots of times it would be breezy in San Antonio,” Jim said. “But by the time we battled the 281 traffic and got to the lake, the wind had died down. Here, we can be on the water in only 10 minutes.”

Having lived in a 1970s-era house for many years, they were drawn to the new home’s contemporary design. “It was a nice change from the more traditional house we were living in,” said Melanie, who is retired from USAA.

Once they saw the inside, they liked it even more. The house has an open plan, with the kitchen and living area combined into one large room, a sloped ceiling and two rows of large windows. 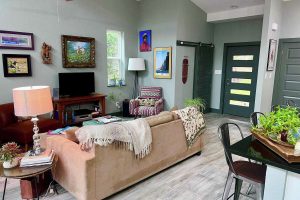 Among the home’s modern design touches are the black and white palette, ceramic tile flooring that looks like wood planks and a powder room near the front of the house with a sliding barn door. – Richard A. Marini

Exposed metal ductwork in the living area and master bedroom gives the home an urban, almost industrial aesthetic, according to Jim. And with both of them in their 60s, the couple also say they like that the one-story house doesn’t have any stairs.

“I’m a retired insurance executive, and I liked what I was seeing while it was being built,” Jim said. “The walls and the metal roof they were installing make the exterior pretty much bulletproof.”

The couple initially bought the property as a second home. But after about a year they sold their house in Northwest San Antonio and moved in full time in November 2020. They wanted to live in the area because it’s so close to Canyon Lake, where they keep a sailboat.

Other modern design touches that attracted them include the black and white palette, ceramic tile flooring that looks like wood planks, a powder room with a sliding barn door, a white subway tile backsplash in the kitchen and black granite countertops throughout the house.

One curious feature is the office niche off the short hallway between the living area and the master bedroom. Large enough only for a built-in desk, a chair and some cabinets, the space came in handy during the pandemic. 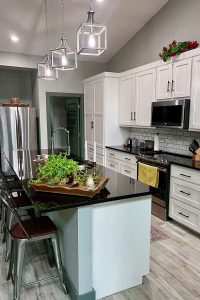 The home’s contemporary design touches include the ceramic tile flooring that looks like wood planks, white subway tile in the kitchen and black granite countertops throughout. – Richard A. Marini

“Everything we do today includes a home offices,” Harrell said. “But this was built pre-COVID, so it was fortunate, even though it wasn’t planned. The only thing we’d do different today is add a door so you could have your Zoom meetings in private.”

The master bath has a walk-in shower with ceramic tile that resembles stones. But the real selling point was the large soaking tub.

A door leads directly from the bedroom to the raised outdoor deck, which overlooks the heavily wooded backyard and the stony creek bed

“It’s usually dry,” Melanie said. “But after it rains, it can run for a month. It’s lovely to hear.”

Because they purchased the house after it was completed, the Hartwells didn’t have a say in any of these decorating choices. But they’re happy with the look and, in fact, the only changes they’ve made are replacing the kitchen hardware and the faucets in the master bath.

The master bath has a walk-in shower with ceramic tile that resembles stones. But the real selling point was the large soaking tub. – William Luther

Since moving in they’ve also discovered that the house is sited in such as way that it gets plenty of light while providing plenty of shade.

“The back of the house faces east, so there’s always lovely sun in the morning,” Melanie said. “And the back deck is shaded from the later afternoon heat.”

“And what I really, really love is the way the moon crosses in front of the windows,” Jim said. “Last night it was so bright, the trees looked like they were in daylight.”

One more thing that stands out in a house designed to blend in.