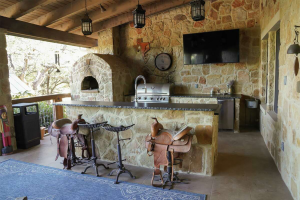 This article was written by Richard A. Marini and appeared in the San Antonio Express News on March 4, 2022.

There was plenty that Vina and John Turner loved about the contemporary Hill Country house they bought here in early 2017: the layout, the kitchen, the wood-trimmed doors and the windows throughout.

But they also knew they needed to make several changes before it truly felt like their home, including expanding the too-small owner’s suite and building an outdoor kitchen where they could effortlessly entertain friends and family.

They also wanted the interior to better reflect their backgrounds, meshing Vina’s upbringing in Las Cruces, N.M., with Dallas native John’s Texas roots. So they added Southwest-inspired furnishings, art and lighting fixtures, and repainted the blah, yellow-cream walls with a rich glaze in shades of beige.

The result is a handsome, rustic home with real New Mexico pueblo style.

“I’ve always loved the rustic Southwestern look,” said Vina Turner who co-owns an urgent care and freestanding emergency room company with her husband. “But I also wanted it a little bit contemporary, too.”

To achieve this look, they called in Shane Harrell, owner of New Braunfels-based Craftmaster Homes, to oversee what became an eight-month, $180,000 project completed in August 2019.

The most complex part of the job, according to Harrell, was extending the owner’s suite bedroom by 8 feet, adding about 170 square feet. This required demolishing the roof and replacing it with a 14-foot-high cathedral ceiling made of pine boards with cedar cross beams. The result is an airy, high-ceiling room that feels larger than it is.

While planning the work, the Turners told Harrell they wanted the bedroom to have plenty of light and views of their thickly wooded lot, which falls away from the back of the house. So he installed sliding glass doors that lead out to a new balcony as well as a pair of large windows above them.

“It’s beautiful at night, looking out at the stars,” Turner said. “John loves to sit on the balcony smoking a cigar and making business calls.”

In keeping with the home’s New Mexico vibe, they installed a tall kiva fireplace in the bedroom, elevating the firebox so it’s visible from the bed. The bed is centered against a pony wall topped with several decorative cross beams.

Behind the wall is the bathroom, where they added a large soaking tub and a glass-fronted sauna. “I love baths … and the sauna was my husband’s idea,” Turner said. “We both enjoy taking a sauna after working out.”

The bathroom suite’s tall, arched ceilings and glazed walls have a soothing, spalike effect. “It’s really a comfortable space and we spend a lot of time here,” Turner said. “Everybody who sees it says, ‘Wow, you really changed the qi in here,’ ” she added, using the traditional Chinese term for “energy.”

The pool and hot tub were already in the backyard when the couple moved in. But right outside the back doors there wasn’t much more than a covered, stamped-concrete patio and fireplace.

To make the space more conducive to entertaining, Harrell added a large, rustic kitchen outfitted with a gas grill, farmhouse sink, refrigerator and a stone pizza oven. Everything’s faced with tumbled Hill Country-style limestone and the island is topped with black, leathered granite finished with a live edge. It’s the perfect spot to entertain while the Turners’ two young kids play outdoors.

The four barstools that belly up to the island provide a whimsical touch: two are western-style saddles and two have steel tractor seats.

“We had a crawfish boil the other weekend,” Turner said. “Probably had about 20 people. It wasn’t planned, but I’m telling you, it happens every weekend that somebody decides they want to come over and have a party.” 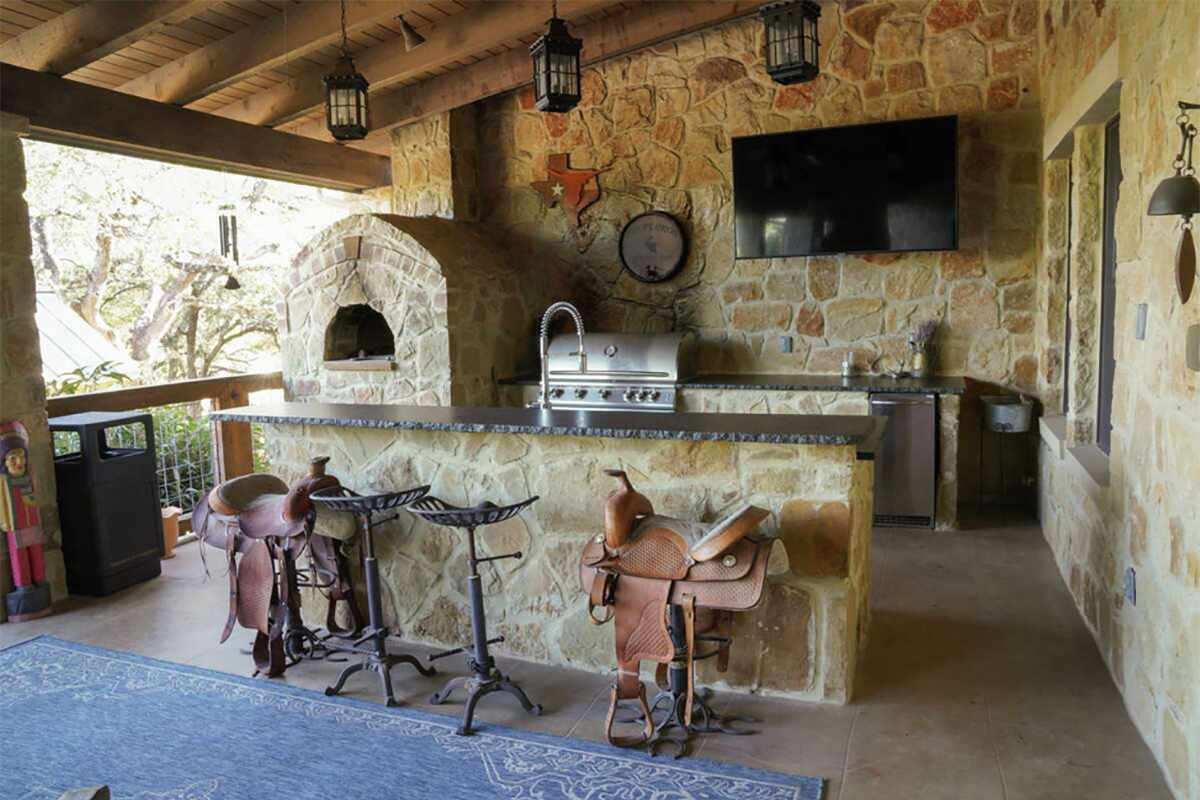 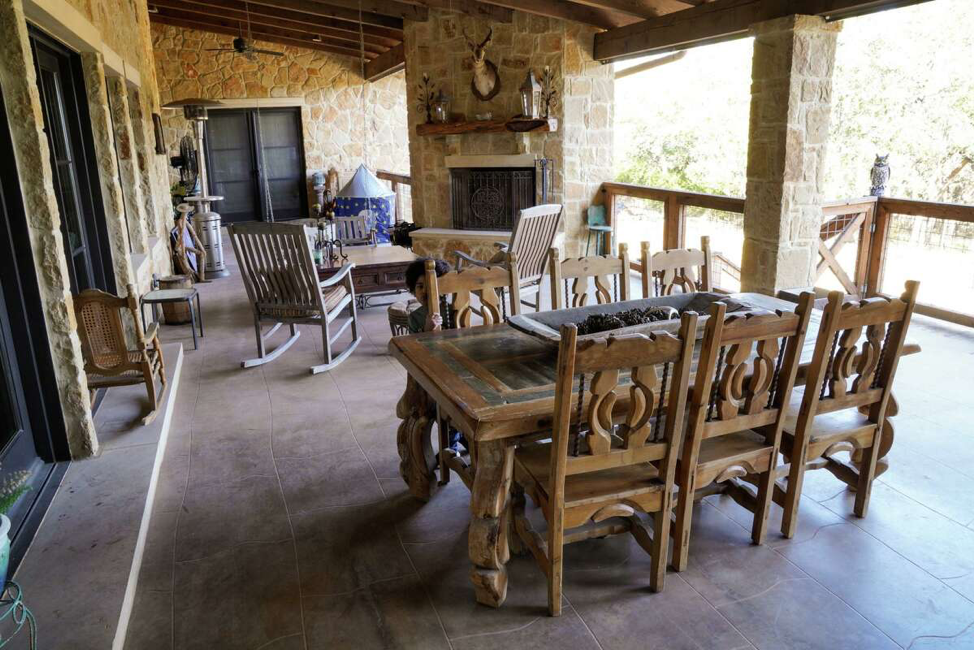 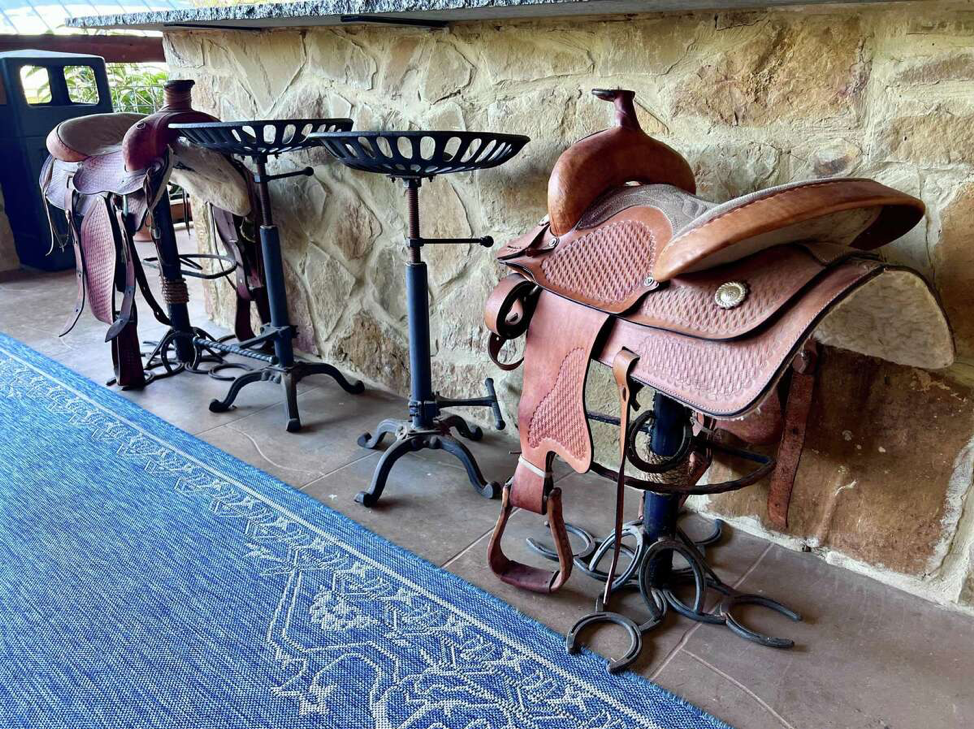 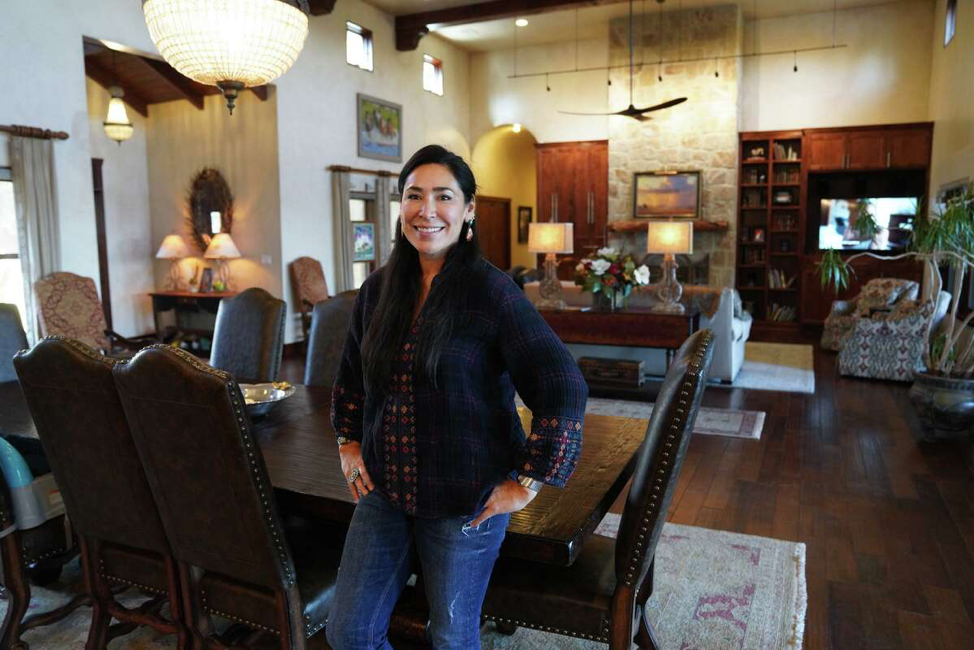 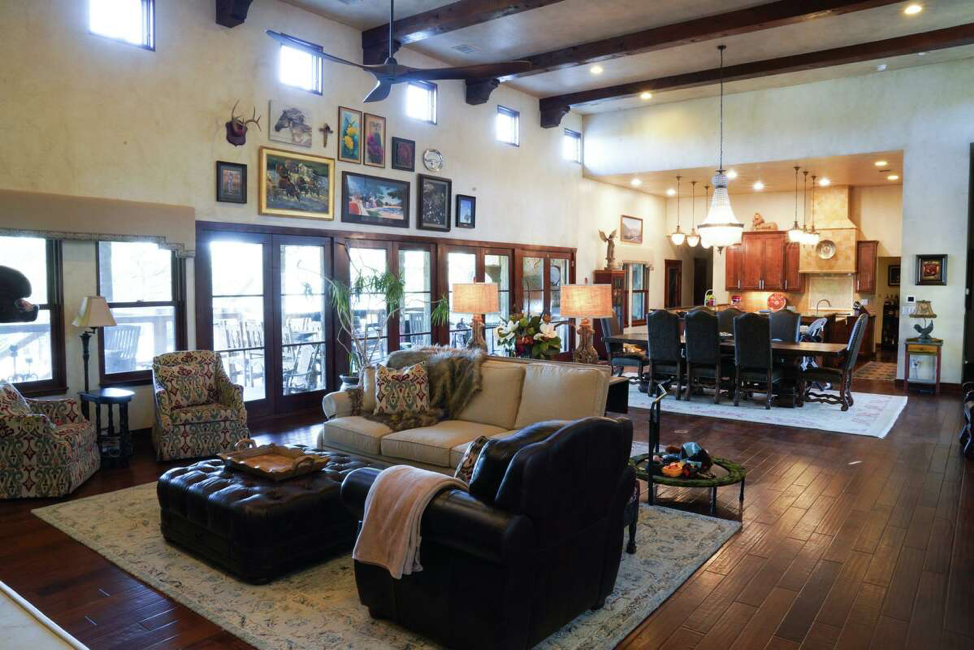 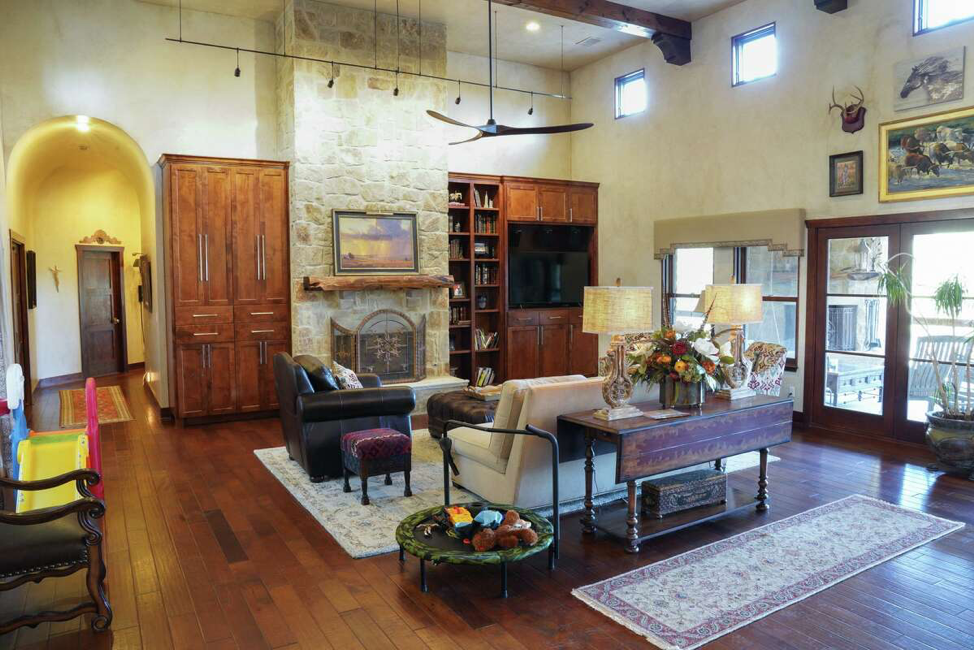 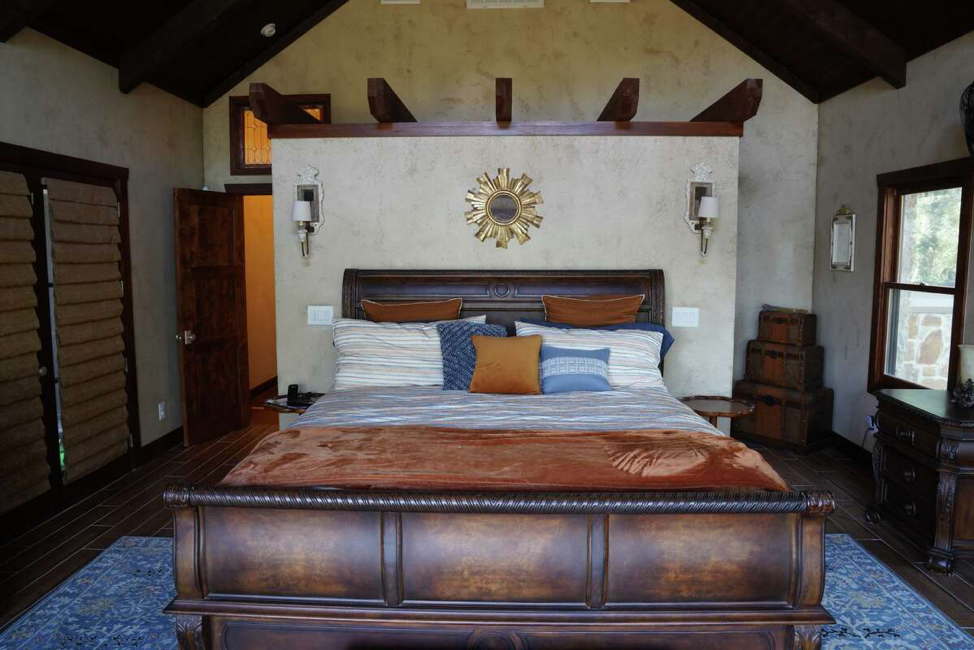 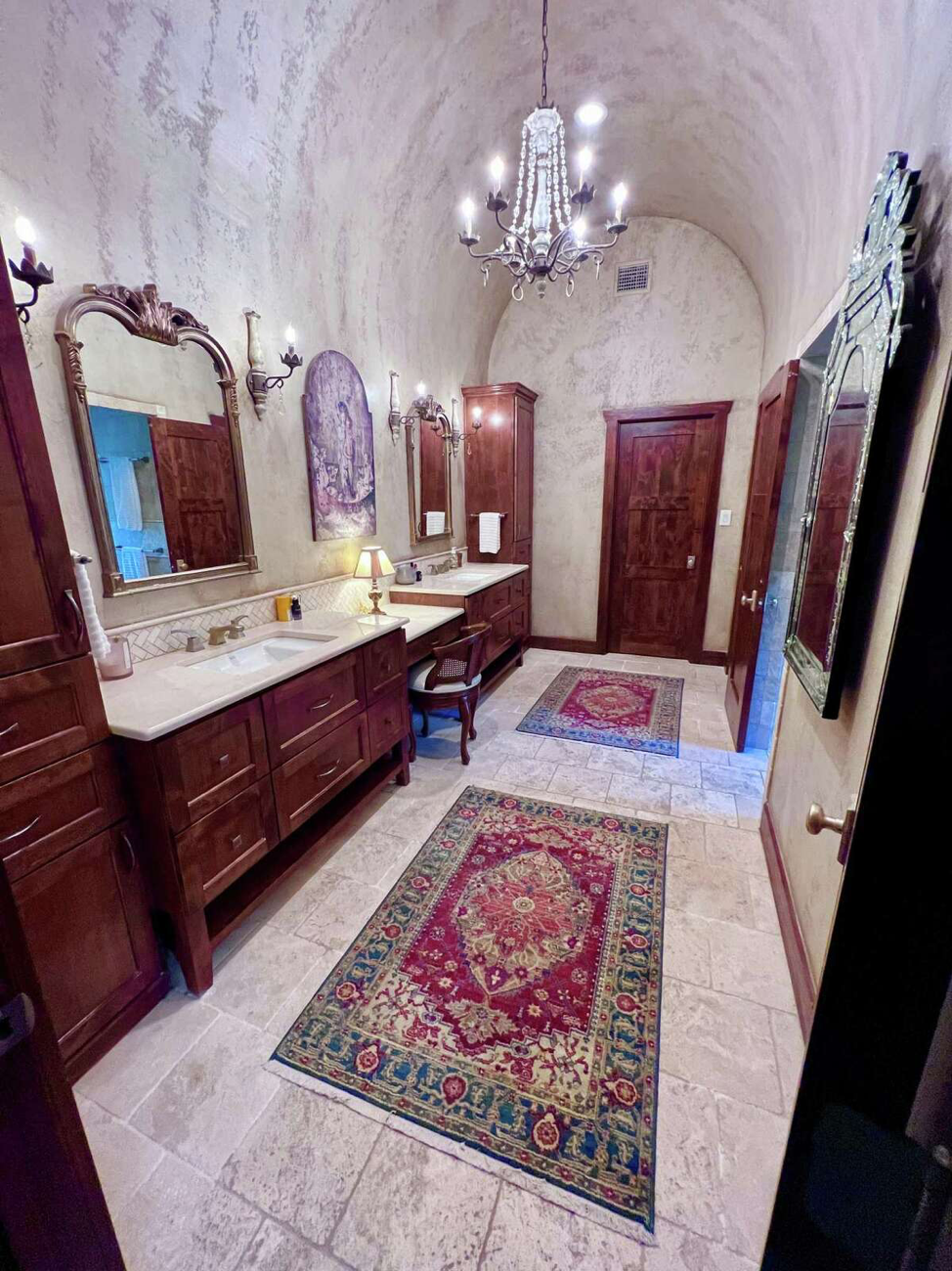 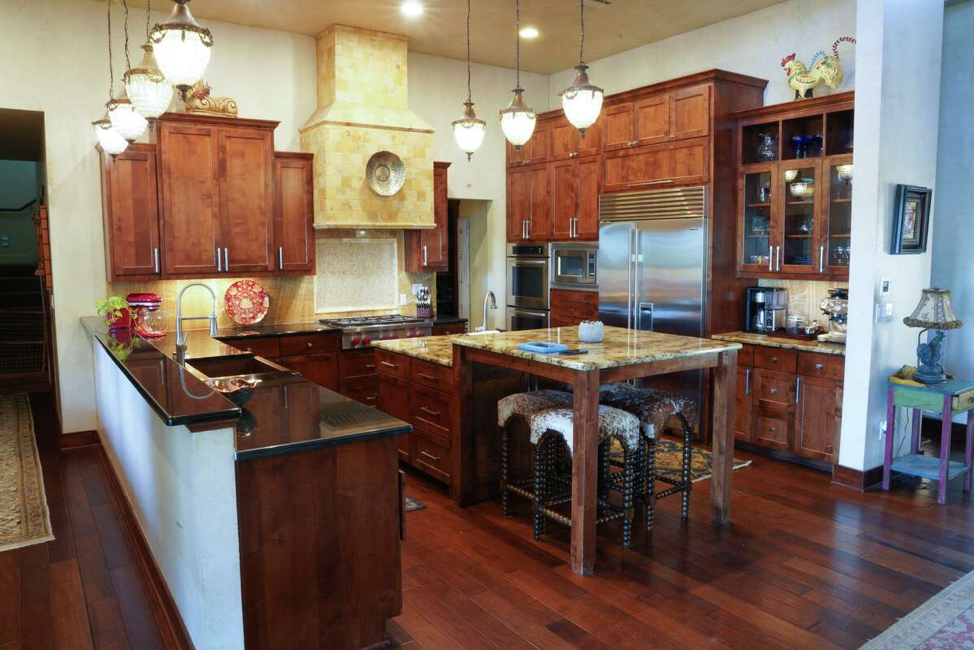 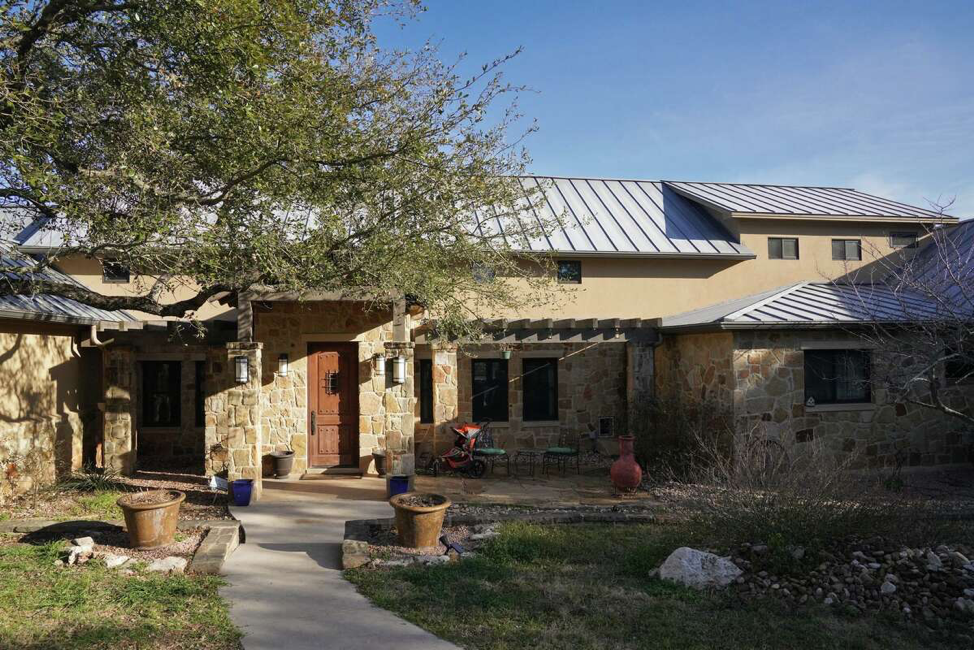 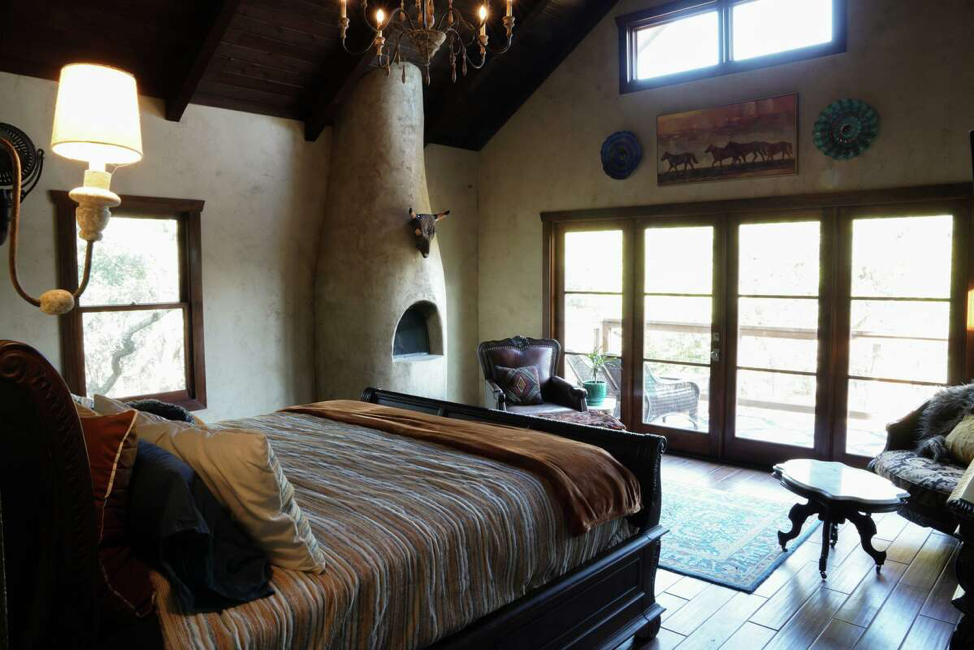